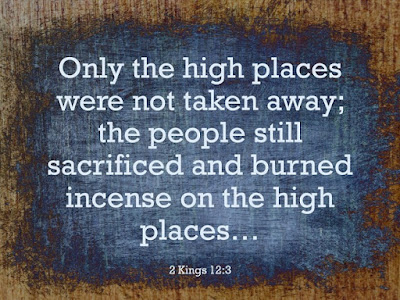 Well this is another election year, which makes the Tuesday after the first Monday in November the terminus ad quem for all the political madness that comes beforehand in the USA. With all the mudslinging, rioting, and overall incivility, it is hard to believe were still have over five months to go.

I am going through the Book of 1-2 Kings at the moment, and the refrain “Only the high places were not taken away” caught my eye, and as I began to meditate upon them, I found them to be a bit helpful in grappling with all that goes on during these turbulent election years.


Jehoash did right in the sight of the LORD…Only the high places were not taken away; the people still sacrificed and burned incense on the high places (2 Kings 12:2-3).1

Jotham…did what was right in the sight of the LORD…Only the high places were not taken away; the people still sacrificed and burned incense on the high places” (2 Kings 15:32-35).

I think it is easy to get caught up in all the rhetoric of the day, and we can make the mistake in thinking if only we get the right person in office America can either progress to a better place or restore its former glory. But, the biblical writer was far more insightful. There were good political leaders in Judah who sought to do the righteous and godly thing. They tried to put God back into the center of their nation’s life and worship, but the masses never caught on, and paganism continued in spite of the reforms. What I am getting at is this: the big picture is far from just getting the right politician to lead the country, sure that is a good thing, but there is more to it than just that. It is just not enough to have a good leader in political office. Common people must also play a part in providing for the common good that makes a nation thrive.

In 1-2 Kings we find potentates, priests, prophets, and common people struggling to live faithfully to their covenant with Yahweh in the land promised to Abraham, Isaac and Jacob. Thriving as a kingdom was woven together with faithfulness to the covenant, and unfaithfulness to the covenant would eventually lead to self-destruction and exile (cf. Deut. 11:26-32; 27:1-30:20).

One of the most deflating passages in the history of Judah comes in the account of Josiah’s reign. The biblical writer tells us that Josiah “did right in the sight of the LORD and walked in all the way of his father David, nor did he turn aside to the right or to the left” (2 Kings 22:2). The problem is “the LORD did not turn from the fierceness of His great wrath with which His anger burned against Judah, because of all the provocations with which Manasseh had provoked Him. The LORD said, ‘I will remove Judah also from My sight, as I have removed Israel. And I will cast off Jerusalem, this city which I have chosen, and the temple of which I said, ‘My name shall be there’” (2 Kings 23:26-27). An idolatrous king named Manasseh set the nation of Judah on a trajectory that in spite of Josiah’s religious and political reforms a national recovery was impossible. (I don’t think were there yet, but it is an ominous to imagine something like that being the case.)

Now I do believe Christians are to be out in the public square, involved in the political process, and making cases for policies that will improve the common good, reflecting the ethics of a biblical worldview. This is something to be done. On the other hand, more than just getting the right candidate in office, the Christian is to keep focused on the prime directive, which is the proclamation of the gospel. Remember, the gospel “is the power of God for salvation to everyone who believes” (Rom. 1:16). Spiritual transformation is a prerequisite to any positive social transformation. Reformation needs to occur in the potentates, prophets, priests, and common people for there to really be lasting transformation.

First century Christians lived in times when Caesars reigned supreme, and some of them like Nero were as antichrist as they could be, and the followers of Jesus experienced unparalleled tribulation. In spite of being completely marginalized in a Roman Empire, Peter encouraged the church to “Keep your behavior excellent among the Gentiles, so that in the thing in which they slander you as evildoers, they may because of your good deeds, as they observe them, glorify God in the day of visitation” (1 Pet. 2:12). These words are apropos for twenty-first century America, especially when secular antagonism grows against Christianity as a whole.

It is the evangelistic proclamation of the good news through one’s lips and life from which people can be transformed. It is lives transformed by the gospel that form the building blocks for any lasting social reform and the overall improvement of the common good. It is never enough for civic leaders to use their legislative powers to make changes in the land, especially if common people are dead set against any change for good. Hearts of stone need to be transformed into hearts of flesh.

Popular posts from this blog

The Good Thing About God and Judgment 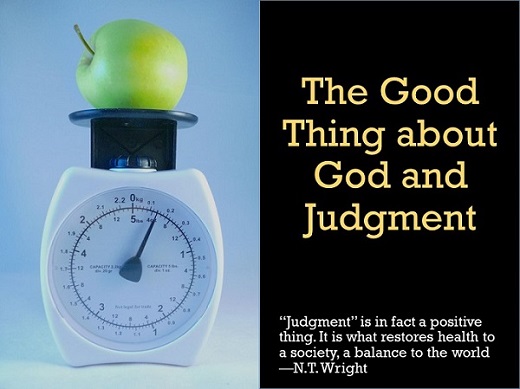 Today, I was continuing my trek through the extensive Paul and the Faithfulness of God by N.T. Wright. There is so much content in this extensive two-volume work, I can only soak in a small percentage of it. Working through Wright is always a work in progress. He is just one of those astute theologians who leaves no stone unturned in developing a point. Wright makes this observation about the way the larger story of the New Testament conveyed in Paul’s works concerns God’s judgment in the world, which is part of the way he has come to setup his rule over the world. On p. 481 Write notes,  The word “judgment” has of course been allowed to slip into negative mode in the contemporary western world, with “judgmentalism” one of the classic postmodern villains. But even a postmodernist whose car has been damaged by a drunk driver wants a court to pass “judgment” against the offender. “Judgment” is in fact a positive thing. It is what restores health to a society, a balance
Read more

I have Moved the Love Truth Blog...